The game is a story about terran girl Casey, who comes to a new world Panthea. She’s wants to forget her past and start a new life here. Casey gets a positions of sales assistant at ‘Galaxy Pumps’ LLC just to discover that her new world is full of lust and sexual opportunities.

In this game you’re going to play as Casey – doing some fun or dumb daily work, meeting new colleagues & building relations with them… or going drunk and crazy J I was trying to concentrate both on sex aspects of the game and on the story & atmosphere, creating characters with their own traits, possessions and storylines.

Boss & Casey h-scene designed & animated
Dorm room location implemented
Story: get promoted to juniour salesman by having good relations with Boss
Or buy a camera and find another way for promotion. I also have other plans for using camera in the game later. Ask Jack for clue how to get it.
3 new text scenes for doing daily work after career reaches 20
Some roots for new ways to improve your technical skills
Mechanics for encounters were completely revised (I wanted to fight old mechanics, that allowed intersecting stories to run at the same time (for example you could have 2 Kelly for different events in the corridor). For now you should finish one story to get another with same characters involved (if the same day)
Big bug was found and fixed that encounters weight was not saved / loaded during save game (so after you open game and load old save game – you are showered with encounters happening all the same day). For now saves work correctly, however loading old save game will get all events triggered same day for once (so after you save later this is fixed)
Small bugs fixing: got stuck behind Boss chair; got stuck at cooler; can’t work after career reaches 19; ‘topless photos’ topic with Kelly moved up 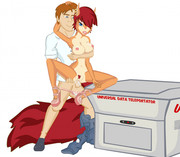 1810 mb
About this game: Lust. It can consume you, devouring your soul as it corrupts you and those around you. Leading you on a journey of debauchery and immorality so perverse that...