Games
Favorite
"Paccsu - Namu's Journey is a LEWD RPG game set in a fantasy world called Paccsu. You take control of a Muh'kean girl called Namu, who was taken away from her birth parents at a young age to be a part of a holy ritual in Muh'kea'sdesperate attempt to fight The Undying King, the King of Zombies. 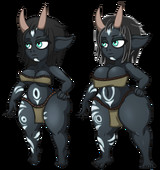 358 mb
The year is 1136. The Kingdom of Man. A small caravan of actors and traders travels to the Zalesje village. Among them is the main character – Rodinka, a young but prominent...

Unaware Team Unaware of the World version 0.19a

178 mb
Overview: Main character is an innocent, beautiful 21 years old girl who left her family house in a small village and moved to the big city in order to start her new, adult life....

892 mb
There is a country blessed with the plentiful vegetation and clear waterin the western part of the Aeinxia continent. The prosperity of the country owes a lot to so-called "Spirit...

890 mb
Lina is an extremely talented female detective who has traveled to a certain town to investigate the strange disappearances of numerous homeless people. According to the local...